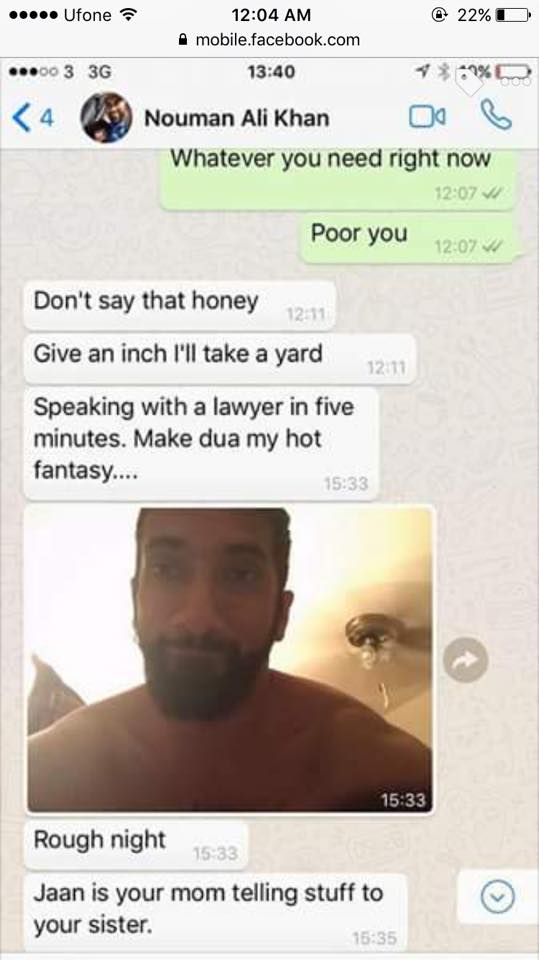 Nauman Ali Khan is a Sick Headed Pervert or is he?

Rabia Chaudry is a fellow of the Truman National Security Project and the New America Foundation. Don’t be a blind follower to the screenshots floating on the ahmedi-ran media: you are educated enough to learn that I can also save any random number with your name and manipulate any bullshit out of it. This is what he has to say:

There was no rape or sexual assault.

I’m not sure if there was anything beyond possibly naughty texts.

If all he did was enter into relationships of any consensual kind with women then what’s the problem? Why call these consenting women victims? Why portray him as some evil monster rapist? Why even make this a big deal at all?

1. Although I doubt Nouman was like this, Muslim men have a stereotype of having sex with everyone and throwing them away then lying about being perfect Muslims and expecting their future wife to have never had sex or done anything haram. If hundreds of thousands if not millions of Muslim men enter haram relationships and it’s not newsworthy then why is this?

2. He preaches about Islam but that doesn’t make him perfect so why hold him to a perfect standard?

3. With Rohingya being raped and slaughtered, Palestinians being killed and forced to live in inhumane conditions, Muslim women being oppressed around the world and killed for ridiculous reasons etc etc etc, why are we talking about this? Why spread this gossip? It’s as stupid as talking about kardashians while people are dying in Yemen or the recent hurricanes and earthquake.

Don’t know why they turned him into this infallible celebrity sheikh in the first place. Now they’ll watch him fall right back into place with the rest of us mere mortals. One day when I was reading Surah Noor, I was trying to imagine the agony of Hazrat Ayesha and Hazrat Muhammad SAW when she was accused of the same. There is a complete set of protocol defined then for us in the same Surah for us in situation like this. On the other hand he never claimed to be self proclaimed Sheikh but his knowledge of Quran is amazing.

In this day and age religious knowledge is so widely accessible, through multiple mediums, with various schools of thought and diverse perspectives squarely represented, sourced directly from their respective proponents, that I just don’t see the need for this kind of hero worship anymore.

My favorite line from Nouman Ali Khan’s statement on Facebook is:

I believe the interactions in question were based on mutual consent.

Usually that line is used if someone accused you of sexual harassment. Though I tend to believe victims more than aggressors, but even if we take his word for it, doesn’t that make him a hypocrite. Telling others dating is bad and doing this himself. Also discussing Mahira and Him is completely different. She was not lecturing us how to live our life, he was.

I do not support the people who spread things about Mahira Khan because it was her private life, as well as Nauman Ali Khan because that is his private life. Just do your homework, get your basics right, take what makes the most sense to you in your heart, and leave the rest to those who prioritize technicalities over basic humanity.

Everyone of us has weak moments I guess.

Moral of the story: Do not discuss sensitive things on Whatsapp.