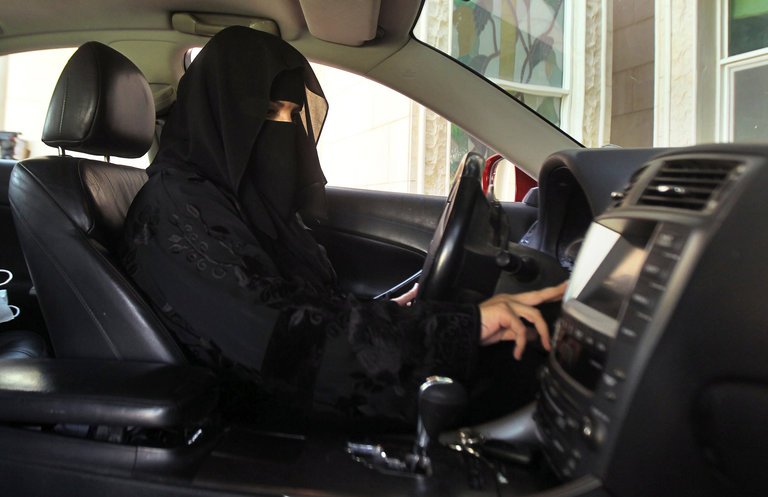 Saudi Arabia to Allow Saudi Women to Drive in 2018

I don’t think there is anything wrong with women driving cars but why isSaudi Arabia using this to please the West? Finally, Musharraf’s contagion of enlightened moderation is getting to the Saudi’s to please their masters. After all they had been their slaves much before us. Globally, the economy is bad. Saudi Arabia, like Malaysia, is realising and feeling the ill-effects of a “rentier economy”. Therefore, it needs every possible hand to help the country’s economy even though that hand belongs to a woman. In order to contribute to Saudi Arabia’s economy, women need to participate aggresively by driving to and from their workplaces. For that reason, Saudi Arabia has lifted the driving ban. During bad times, people’s brains will start functioning properly.

Following the decree, women will no longer need permission from a legal guardian to get a license and will not need a guardian in the car when theydrive.— Saudi ambassador to Washington DC, Prince Khalid bin Salman bin Abdulaziz

This is 2017. “Allowing” women to drive is not saudi arabiastepping out of anything. More like a tiny half step in the right direction. Strangely, the declaration that Saudi is going to bomb Yemen was made by the ambassador also. In a Royal decree delivered by King Salman, women in Saudi Arabia will now be able to obtain license and drive by June 2018! Saudi authorities have lost their mind and are making decisions irrationally. How will women driving will help their economy 80% of Saudis are rich they either own a car and a diver or they are free to hire cabs it is just a very small of women that are career oriented and I don’t think they need a Driving Liscence to showcase their talent. This move is just to keep their country women happy and boost their moral while they would seriously upset their better halves It will not come into effect for months and it is primarily being driven by economic reasons. It costs households upwards of $1000 per month in fees.

Driving was illegal for women in Saudi Arabia. Manal Al Sharif, the woman who broke that law, went to prison for it and fled the country, all in the name of gender equality. She kept resisting till it liberates women in her country to drive their own life. The more people refuse to follow unjust laws the sooner you’ll see those laws change. It’s the vectors for women, fighting for their rights than replacing the Kindom with real and rational leaders. Carry a gun must be the women part of freedom that the women can defend themselves. Because, their police is so corrupt that most of the women’s rapes are done by police and governmental agencies and not reported in the government record. Unreported rapes.

Related: Ustaadh Nauman Ali Khan is a Sick Headed Pervert or is he?

Men have been getting into fatal car accidents since cars were first invented. Iin fact, women largely have lower insurance premiums since they’re overall safer drivers, and I’ve never yet heard that used as an argument that men shouldn’t be allowed to drive due to being male. However, the moment a woman driver get involved in an accident, all hell will break loose in Saudia, and all who opposed women driving or voting or anything that gives women empowerment will issue statement, like, told you so. And ask to revoke this permission. And what exactly is this vision? Are saudi men have decided to empty their harems of all those concubines and live like descent human beings and treat women genuinely with respect! It’s weird how its apparently gonna still take a whole year to get them in the driving seat.

Fact Check: For those of you who don’t know, few years ago a Saudi Woman got her pilot licence and was hired by Prince Talal for his private plane.

Fact Check: In 2012, we were aware that SABIC and ARAMCO had allowed women to drive in KSA but good to see the general liberalization, it was a fantastic experience working in Al Khobar!

This is surely going to increase the pollution levels there

I wonder what impact will this drive. Shall we see a surge in car sales, insurance, training center application. Should they recruit lady trainers from other countries. Endless implications. They’ve finally come out of the prehistoric era. Let’s hope the move doesn’t come with ifs, buts and fineprint. Saudi Arabia finally decides to take a step out of its misogynistic cave by allowing women to drive. More power to all the courageous Saudi women who struggled to get this very fundamental right! Men and women should have equal opportunities; what they do with them should be their individual prerogative.